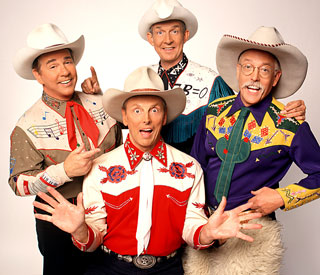 Join America’s favorite (funny) cowboys on a trail ride through the thrilling days of yesteryear with a wacky, way-out Western music revue! Riders in The Sky, the world’s premier Western recording group of today, continues the musical tradition passed down by the likes of Gene Autry, Roy Rodgers and The Sons of the Pioneers.

Standing hats and shoulders above the rest, these charismatic singing cowboys have become modern-day icons by branding the Western music genre with their own wit and humor, straight off the Grand Ole Opry stage.

Throughout their rhinestone-studded career, the Riders in The Sky have performed in 10 different countries and all over these United States, appearing in venues from the Nashville National Guard to Carnegie Hall, and from County Fairs to the Hollywood Bowl. Their enormous talent and comedic flair made them favorites of TV talk and variety shows—over the years, the silver screen beckoned, and they have appeared with everyone from Penn & Teller to Daffy Duck!

Though it may be ‘The Easy Way’ to call it quits after 40-years, it’s not ‘The Cowboy Way!’ —and so, for these white-hatted heroes, the saga of the never-ending trail ride continues!